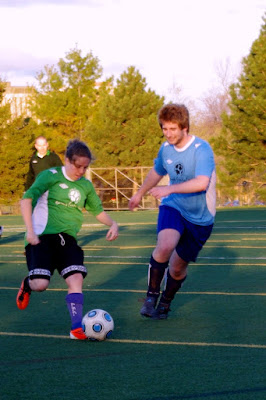 The Ottawa Footy Sevens spring leagues got under way with our first outdoor games of 2012 on Friday night. Carleton University’s Raven’s Field was the venue and the Unincredible Hulks (sporting a truly incredible Fluorescent Green/Black Shorts/Purple and White Socks ensemble) had the honour of kicking off the spring season. Their game against The Return of the Wildcats got underway marginally before Flailers vs Silver Bullets and Dynamo Pylon vs Summer Panthers. However, the Summer Panthers were the first team to find the back of the net with the first goal of the new season, and quickly added the second before anyone else chalked one up. These three games are the first of an incredible 1377 games that will played in the various Ottawa Footy Sevens spring leagues. Raven’s Field was bathed in early spring sunshine for the first couple of game, but as the shadows lengthened, the floodlights came on and the wind began to pick up, it was pretty bloody cold by the time the 8.30 games were underway.

Regardless of the weather, all games were played in a great spirit and there were some fantastic performances. Special mention to the evening’s goalies, who put on a great show with some great saves. We even had the first penalty save of the season with the Flailers goalie diving to her left to make a great save from a smartly struck penalty kick.