The spring seasons are finally underway and the first of 19 spring leagues kicked off last night. At Ottawa University it was men’s 11-a-side and across the city the Friday coed league was taking place under grey overcast skies.

Brad Sweet of the Ghost Kicks knocked home the first goal of the new season against the Goonies a few moments before Lets Get Messi cleaned up with a quickfire double on the adjacent field. Both teams managed to hold onto their advantage and claim victories in hard fought but good-natured grading games. The goals were the first of over 10,000 goals that will be scored during the spring and summer seasons.

Over at Ottawa U, Blue Steel maneuvered themselves to the top of the rankings with an opening night 4-1 victory over the Goaldiggers, a margin of victory repeated by Bayer Neverlusen.

The next few weeks will see the other Footy Sevens action kicking off, with our indoor leagues at Louis Riel underway in the middle of the month, the Kicking Cancer’s Butt charity tournament on the last Friday and Saturday in May and then the leagues at the brand new field at De La Salle underway in early June. Details and registration can be found on the Footy Sevens Website.

The full gallery of photos from last night’s games at Carleton University can be found online. 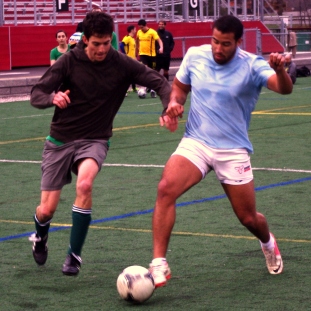 One thought on “Ghost Kicking off the spring seasons.”